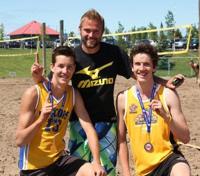 Bringing with him a great amount of knowledge and coaching success, Stephen Wiens is coming back to Canada West for his 4th year as the head coach for the 15U's this year. His volleyball experience includes playing at the college level, Team Alberta Beach, coaching girls/guys at the high school level, coaching 2 Alberta Summer Games teams, being involved with many volleyball camps over the last 10 years which have accumulated him 2 Nationals championships, 5 provincial medals and many other medals from premiers.
The last two years Stephen was the U18 Men's coach at Canada West where over 15 of his athletes are now playing at the post secondary level.
He hopes to take this group of U15's all the way up to their U18 year where they will be able to transition over to post secondary volleyball as well.

Stephen is a hands on educator who has a great connection with his athletes and is able to not only explain, but also demonstrate, how he wants skills performed.

He will be looking for athletes with high work ethic and dedication to the sport.